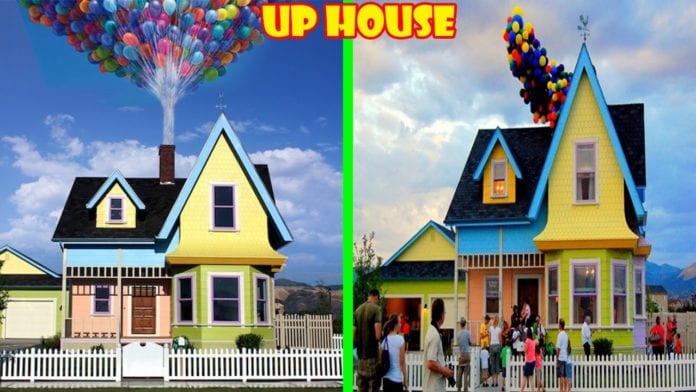 You may have heard an old saying that ‘life inspires art’. Well, sometimes art inspires life as well. How many times have you ever seen something on a television show or movie, or read about it in a fiction novel, and thought to yourself, ‘hey, I’d like to have one of those’?

Whether the ‘those’ relates to owing a car or vehicle, or maybe you see a nice outfit or some shoes that you’d really like to own in real life? Or, what about your house?

Have you ever seen someone’s home on some kind of media or in a magazine and thought that you yourself would like to live there? Well, that’s why today we’re bringing you something unique and lovely that will definitely make your day.

Have A Look At These Beautiful Cartoon Houses

Hello Kitty is a fictional character created by Yuko Shimizu, and they’re toys which are produced by the Japanese company Sanrio.

The world’s most famous cat also has a home, and its life-sized creation is located in Taipei, Taiwan! As you can see, it isn’t just the outside of the house that’s been done, but each room is equipped with the kitten bows and signature pink and white coloration.

With its first episode airing in September of 1960, The Flinstones was widely popular because it was the first animated series that was scheduled to air during prime time hours.

Countless replications, shows, and even movies have all been spawned since the original creation of the fictitious Bedrock family.  One of the interesting things about this show is that it was set in the stone age!

The imagination of the writers for this epic cartoon was heavily relied upon. So, what do houses look like in the stone age? Big Rocks! Just like this home in Nas Montanhas de Fafe in Portugal

For pet lovers, dogs are just another member of the family, and sometimes they even have their own house, just like Snoopy! Snoopy is the beloved dog of the Peanuts comic strip. In the cartoon, he belongs to Charlie Brown.

While this giant-sized version of Snoopy’s home has been created, it isn’t home to anyone else. Instead, it’s used as an information kiosk for a baseball field complex. It’s housed in the Charles M Shulz Museum in Santa Rosa, California

Barbie is a fashion doll made by the American toy company Mattel, and they were created all the way back in 1959. Ruth Handler is the original creator, and trust us, today Barbie dolls are as popular as they were almost 70 years ago.

Little girls across the world love and adore their Barbie toys, and interior decorator Jonathan Adler did his best to do them all justice. In March 2009, he put together this insane recreation. The 3500 square foot home overlooks the Pacific Ocean and looks exactly like Barbie’s home.

You can find this magnificent life-sized replica In Malibu, California, and it’s called Barbie’s Real-Life Malibu Dream House. How cool is that!

Also Read: Incredible Houses Where You Can Actually Live!

Undoubtedly, the most iconic cartoon of all time is, ‘The Simpsons’. Its first episode aired in 1989! The characters; Bart, Homer, Lisa, and Marg are all household names, and it’s rare to find a person who’s never seen an episode. Their house is a character in its own right and easily just as famous as for every person in the series.

One Simpson fanatic thought the same thing about the iconic house and completely replicated it! It looks JUST like the television show, and is stationed in Henderson, Nevada! As you can see there are some pretty intense fans out there!

This pinkish and lavender shade house not only looks pretty from outside, but it’s well-furnished from inside too. It features an oven through which you can see a cake baking, an answering machine (where you can listen to messages from Mickey and Goofy),  and a microwave that even pops popcorn! Amazing stuff! It can be watched at the Mickey’s Toontown Fair, in Orlando, Florida and in Mickey’s Toontown too in Disneyland Anaheim, California.

This wonderful Hobbit House was given shape by Simon Dale, who despite not being an architect or even a construction worker, could frame this together with his father-in-law and the help of passers-by. It took them merely 4 months to give it the finishing touch and it cost around 3,000 pounds.

This house looks like Heidi’s grandfather’s and even the surroundings look very similar.

This secret unusual house looks like Gotham City’s most popular mansion. And that red fleam makes anyone wonder if Batmobile has just passed by.