Top places to visit once in Odisha 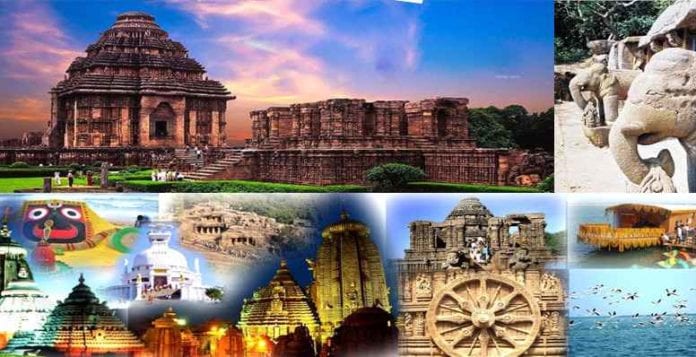 It is surrounded by the states of West Bengal to the north-east, Jharkhand to the north, Chhattisgarh to the west and north-west, Andhra Pradesh and Telangana to the south and south-west. It is the 9th largest state by area and the 11th largest by population. Bhubaneswar is the capital of Odisha.

It is a sacred Vaishnava temple dedicated to Lord Jagannath. It is an important pilgrimage destination and is particularly visited by devotees of Supreme Lord Sri Krishna and is one of the Char Dham pilgrimages that anyone is expected to make in one’s lifetime. It’s one of the top places to visit in Odisha.

The temple is famous for its annual Rath Yatra, or chariot festival, in which the three main temple deities are hauled on huge and elaborately decorated temple cars.

The Jagannath temple was built in the 12th century during the era of the Eastern Ganga dynasty’s King Anantavarman Chodaganga Deva, a dynasty known for also building the Sun temple of Konark and several major Shaivism temples and holds the tag of one of the top-tourist attractions in Odisha.

It is believed that the temple was built by King Narasimhadeva I of Eastern Ganga Dynasty in 1255 CE. The temple complex is in the shape of a gigantic chariot, having elaborately carved stone wheels, pillars and walls. A major part of the structure is now in ruins. The temple is a UNESCO World Heritage Site which is amongst the best places to visit in Odisha.

It has some beautiful waterfalls like Joranda and Barehipani. Simlipal is home to 99 royal Bengal tigers and 432 wild elephants.

Also Read: List Of 17 Most Weird And Beautiful Lakes Around The World

It is a brackish water lagoon, spread over the Puri, Khurda, and Ganjam districts. It is the largest coastal lagoon in India and the second largest lagoon in the world. The lagoon hosts over 160 species of birds in the peak migratory season.

Birds from as far as the Caspian Sea, Lake Baikal, the Aral Sea and other remote parts of Russia, Kirghiz steppes of Mongolia, Central and Southeast Asia, Ladakh and Himalayas come here. It’s amongst the most beautiful places to visit in Odisha.

Also Read: 10 Most Surreal Temples And Places That Makes Your Wishes Come True

It is a Hindu temple dedicated to Harihara, a form of Shiva and Vishnu and is one of the oldest temples in Bhubaneswar.

The temple is believed to be built by the kings from the Somavamsi dynasty, with later additions from the Ganga rulers. The temple complex has 50 other shrines and is enclosed by a large compound wall.

Lingaraja temple is maintained by the Temple Trust Board and the Archaeological Survey of India (ASI).

Also Read: 10 Best National Parks In Spain That Will Thrill You Upside Down

It used to be the hunting grounds of the erstwhile King of Kanika. The hunting towers and artificial watering holes can be seen at many places including Bhitarkanika trail and at Dangmal.

It is a 400-hectare zoo and botanical garden. The zoo is home to about 1660 individual animals representing 166 species, including 67 species of mammals, 81 species of birds, and 18 species of reptiles.

Endangered species such as the Asiatic lion, three Indian crocodilians, Sangal lion-tailed macaque, Nilgiri langur, Indian pangolin, mouse deer and countless birds, reptiles and fish have been breeding successfully. It’s one of the best places to visit in Odisha.

Umaid Bhawan Palace Hotel in Jodhpur is a place...
Interests

Traveling the world is one of the most diverse...
Cultural Trip

No Janmashtami Celebrations This Year; Vibrant Cultural Explorations You Will Be Missing

India is one of the best places to visit...