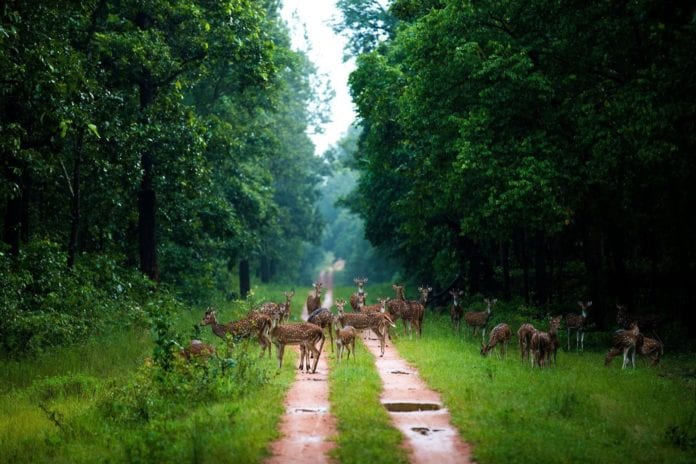 People like to go to places where they can get rid of summer just as this season arrives. Because of this, most people opt for hill stations of Uttarakhand and Himachal Pradesh.

Today, we are going to tell you about Offbeat Destination, where not only can you spend fun holidays, but you can learn a lot about this place. We are talking about the city of Manpat, which is also known as ‘Mini Shimla‘ in Chhattisgarh; This miniature Shimla is situated on a plateau in Sarguja District of Chhattisgarh state. We may tell you that Chhattisgarh is the most tree-covered state of India. Manipat was more of a jungle in the past where only a few locals dared to live.

The place was a beautiful landscape in a deserted place. The Tibetan people made huts which moderately turned into better houses where they live now.

Mainpat comprises of a group of 62 plateaus settled at 1,100 m/3,200 ft. The road moved 30km up from the base of the hill via sal forests. The region was the resting place to the Yadavs and tribes like Manjhi, Manjhwar, Kanwar, Oraon and Pahadi Korwa, and more recently Tibetans.

It’s one of the regions where, in 1896, the Indian Government established Tibetan refugees in the wake of the Chinese invasion of Tibet. If we talk about other jungle tribals of the region, 7 settlements, figuring approximately 2,000 with Tibetan Buddhist monasteries in mostly all camps.

Mainpat is an alluring picturesque top tourist destination perched on a jungle plateau with so many cultural and natural sites of interest.

Tiger Point of Manpath is a beautiful waterfall. Tiger Point, where tigers roam and Fish Point or Machali or as the river here was well-known for a type of fish.

At the Mehta Point, there is a beautiful view of the valley. Fish Point is also one of the beautiful places here. When the place is viewed from Mehta Point and Pharphatia, Manipat offers panoramic views of waterfalls.

Here the earth shakes when you jump!

Jaljali is near the Mainpat, where two to three acres of land is quite soft and by jumping here earth shakes like a mattress. According to the people, living near Jaljali, there must have been water sources which have dried up from time to time and the ground inside is left boggy. This is an example of a technical term ‘liquidity’.

At the same time, there is a theory that the internal pressure of the Earth and the area is filled with water instead of solid, hence it seems rather swampy and spongy.

A bizarre view involves the bouncing traffic of Jaljali and captivating Chota Jharanā folded together with jungle views having a small waterfall with amazing views. Other eye-catching sights involve the picturesque Buddhist temples on this secluded jungle plateau and you’ll find alluring attractions like Bageecha and Zalzala.

Besides the mini Shimla, it is called ‘Tibet Culture’

After the Chinese occupation of Tibet on March 10, 1959, the Tibetan refugees in five areas of India have settled down in their home country, there is a Mainpat.

These Tibetans who live in different camps of Mainpat are here to cultivate Tau, Maize, and Potato. Here the monastery, people and culture are all like Tibet, so it is also known as Mini Tibet.

To reach Mainpath, reaching Manpatt, traveling by the Ambikapur-Raigad highway, 85 km away from the place called Karabel and 50 km distance from Ambikapur to Darima Airport route has to be set. It is about 390 km away from the capital Raipur. Ambikapur district headquarters can be reached by taxi or bus.

The best time to visit Chhattisgarh, India is October to March.

If you are looking for a perfect beach destination...
India

Another architectural marvel and mesmerizing structure to wow you,...
Destinations

Given the diverse culture and distinct history in India,...